As Adults Legally Smoke Pot In Colorado, More Minority Kids Arrested For It 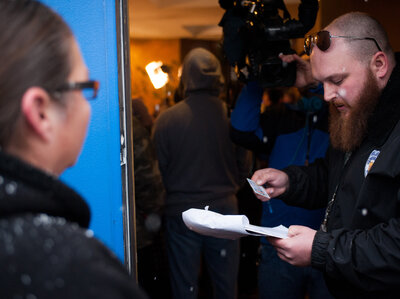 Kurt Britz checks a driver’s license at the 3-D Denver Discrete Dispensary on Jan. 1, 2014, the first day recreational marijuana sales were legal in Colorado. Possession remains illegal for those under 21 years old, and statistics show a widening racial gap in arrests for those offenses.

Marijuana is legal in Colorado — as long as you’re 21 or older. It’s still illegal for kids to possess, so juveniles are coming to dominate the marijuana arrests in Colorado. But another startling trend also has developed: Arrest rates have risen dramatically for young blacks and Latinos.

Ricky Montoya isn’t surprised that’s happening. He’s standing outside Courtroom 4F in Denver’s City and County Building, where he was just ordered to pay a $1,000 fine for his third marijuana possession offense.

“They probably look at us more different,” he says of police. “I don’t think they think that white people would smoke as much as we do.”

A Colorado Health Department survey found there wasn’t a huge racial difference in who smokes pot. But the marijuana arrest rate for white 10- to 17-year-olds fell by nearly 10 percent from 2012 to 2014, while arrest rates for Latino and black youths respectively rose more than 20 percent and more than 50 percent.

That was evident that morning at the courthouse, where about a dozen cases were heard before noon. Only one involved a white kid.

Brian Vicente, who led the marijuana legalization movement in Colorado, says that discrepancy needs to stop.

“That is, I think, a large part of the reason Colorado voters passed legalization,” Vicente says. “They’re tired of the sort of racist legacy of the drug war.”

Vicente says it’s shameful that local police have shifted their attention to minority kids. But Denver Police spokesman Sonny Jackson says it’s not a matter of what police want to focus on, but what people are reporting to authorities.

“Most of these cases are complaint-driven,” Jackson says. “We get a complaint from someone, we’re not sure where it’s going to take us, but we have to act on it. And we’re not sure, if I get a call to a residence or to a location, who I’m going to encounter until I get there.”

Jackson says that pot arrests for adults, of all racial groups, have been cut in half since legalization — and he emphasizes that marijuana is a low priority for the department.

Humphreys theorizes that the marijuana businesses themselves may be playing a role in who gets arrested.

“The emerging legal marijuana industry is overwhelmingly white-owned and white-dominated, and provides good access to white customers,” he says. “So one possibility is that that leaves the illegal market disproportionately composed of people of color, both the buyers and the sellers.”

That issue touches Wanda James, who owns the Simply Pure dispensary in a gentrified neighborhood in northwest Denver. It’s a Friday, and there’s a steady flow of customers in and out of her shop — most of them white.

As a black woman, she is an anomaly in the industry, and news that minorities are being arrested at higher rates for marijuana offenses in the city makes her angry.

But she points out the targeting of minorities by law enforcement is not just a Colorado or Denver problem — “there is not a major city, small town, rural county, city-county, outskirts, beach community that does not have this exact same problem” — and safe and legal access to pot clearly hasn’t wiped that away.

With recreational cannabis legalization just around the corner, it is becoming increasingly apparent that black and Indigenous people have been disproportionately victimized by Canada’s war on drugs. As the American example demonstrates, we cannot simply expect racial disparities in arrests to disappear post-legalization. A concerted effort by the government of Canada is required to ensure the equal enforcement of drug laws going forward.

That Canada’s drug laws have disproportionately targeted certain racialized groups should not be of any surprise. As Susan Boyd details in her new book Busted, the application of Canada’s drug laws have always been racist. Prohibition over alcohol consumption was initially limited to the Indigenous population, the Opium Act of 1908 was passed to control the threat Chinese residents posed to white labour, and cannabis was criminalized in 1923 after Emily Murphy stoked fears of the “negro menace” in her book The Black Candle.

Unfortunately, unlike the United States and United Kingdom, Canada does not systematically collect or publish racially-disaggregated data on its criminal justice system. We therefore know little about racial differences in who is arrested, convicted or incarcerated for drug-related offences. The limited data that are available have been obtained by journalists through freedom of information requests, as was the case in this week’s VICE News investigation.

Data published by the Toronto Star in the summer of 2017 showed that black people in Toronto were overrepresented in cannabis possession arrests made by the Toronto Police Service between 2003 and 2013. The data featured in this VICE News series show similar disparities across the country. From Vancouver to Halifax, black and Indigenous people are disproportionately arrested for cannabis possession by local police agencies. This is despite the relatively similar rates of use across racial groups.

As a result of these disparate arrest rates, black and Indigenous people are more likely to suffer the destructive consequences associated with having a criminal record. These consequences include diminished job opportunities and restrictions on travel, affecting not only the criminalized, but their families, communities and society as a whole.

Canada’s racist war on drugs must come to an end, but legalization is only the beginning.

In both Canada and the United States, the move towards drug legalization has been touted as a means of promoting racial justice. Given the powerful role drug laws have played in criminalizing black and Indigenous people, fewer arrests will be an improvement.

However, evidence from American states that have either legalized recreational cannabis or decriminalized its possession, show that the same racial disparities persist. In Alaska, California, Colorado, Washington and Washington D.C., black people continue to be disproportionately arrested and charged for cannabis-related offences. In fact, after cannabis was legalized in Colorado, arrest rates for black youth rose by more than 50 percent while arrests of White youth declined by 10 percent.

The fact is that racial disparities in arrests for drug offences are the result of broader policing practices that are themselves heavily racialized. Racial profiling specific groups on the basis of stereotyping, rather than evidence of criminal activity, is at least partly to blame. We know, for example, that cannabis possession arrests in Toronto increased in tandem with the practice of “carding.” Because carding is heavily racialized, black and brown people are more likely to be stopped, searched and arrested for drug possession. There is also evidence to suggest that the police exercise discretion differently across racial groups, giving some people a break while choosing to arrest and charge others for the same activities.

Legalization, counterintuitively, will mean more laws regulating recreational cannabis than there are currently under prohibition. The increased focus on, and enhanced penalties for, cannabis-impaired driving, possession of “illicit cannabis”, trafficking to young people and youthful possession that will come as a result of legalization may just as easily reproduce existing racial disparities.

Drug legalization will only amount to racial justice if the broader forces that promote injustice in Canada’s law enforcement apparatus are addressed. Effective oversight of police stop and search activities in general, and of drug law enforcement in particular, are crucial. This requires access to meaningful and reliable data that should be proactively released and not left up to our news agencies to acquire under inadequate freedom of information laws.

On their face, statements by police leaders and government officials affirming their commitment to equality can sound convincing. But such promises do little if they are not supported by concerted action. That is a responsibility of our government, and one they must explicitly acknowledge in their current commitment to legalization.

Alex Luscombe is a criminologist at the Centre for Criminology and Sociolegal Studies, University of Toronto

Akwasi Owusu-Bempah is an assistant professor at the Department of Sociology, University of Toronto